Our University days are full of some of the greatest achievements and most treasured memories of our lifetimes. In the next of our 'Alumni Memories' series, alumnus and founder of the 'Carnatic Halls in the 1970s' Facebook group, Paul Britton (BSc 1976), shares his memories of the scorching summer of 1976, photos of the flurry of graduation and life after Liverpool.

"The summer of 1976 was the hottest and driest of the century with a prolonged drought leading to water shortages and standpipes in the streets. The heat seemed endless with a grassless Abercromby Square burnt to a yellow dust bowl.

In the days before air conditioning those revising for end of year exams sought refuge under the trees of Carnatic and Greenbank. The city of Liverpool seemed to slumber, the revolving restaurant at the top of the St John’s Tower floating disembodied above the thick layer of smog that blanketed the city.

But it was not only for the weather that I remember the summer of '76. It was also the end of the three happiest years of my life as I would be kicked out into the real world after graduation in July. This ghastly reality had stolen up on us since Panto week in February, an uncomfortable prickling sensation at the back of the neck at first but gathering in intensity as the months went by.

The last few weeks were a blur of exams, parties, returned library books, packing trunks and arranging the handover of our house in Cretin Road to the landlord. Another task was the exchange of home addresses, usually on odd scraps of paper torn from envelopes and tucked into the plastic cover of Guild Diaries for safe keeping.

Graduation day, Thursday 8th July, dawned at about 5am, still blisteringly hot with no prospect of relief from the heat. My parents arrived in their car around lunch time at the History Gang’s Jubilee Drive house where I was staying, with my father clutching his new toy, a Eumig 8mm cine camera. A brief photoshoot followed, then after a flurry of farewells and exchange of addresses it was off to Kenmare Road to the house of my number one Panto Girly who had agreed to look after some of my luggage until graduation day.

I was running late so it was a very brief visit, at the last minute she frantically scribbled her parents address on a scrap of paper torn from an envelope and gave it to me with a farewell kiss. As my father drove away I watched as she waved and waved me out of her life for the next ten years. 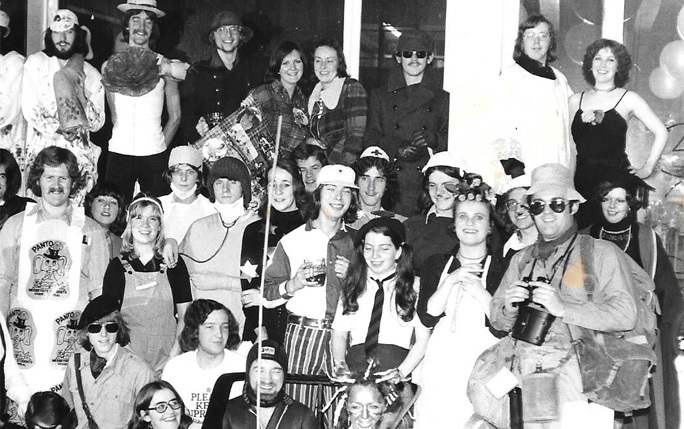 The graduation ceremony in the Philharmonic Hall was thankfully over very quickly. Three piece suits were all the rage in '76 along with four inch platform heels, winged collars and kipper ties, we might have looked cool but we didn’t feel it. With a couple of thousand people inside the Phil the heat was frightful and as soon as the ceremony was over everybody poured outside into Hope Street.

My father continued to indulge his new hobby outside as the crowd ebbed and flowed amid a flood of farewells which in far too many cases proved to be goodbye for ever. I took my mother’s Kodak camera to take a photo of my parents and as I wound on the film a familiar face appeared out of the crowd, Andy Seymour, a fellow Zoology practical sufferer.

He had not seen me but a shout of Andy made him turn in my direction so I got a nice un-posed photo. My father then came over and we both posed together for him. Another exchange of scraps of paper and we were off into the rest of our lives, he to a career in Fisheries and me to the Metropolitan Police.

I moved to London in 1977 and it was not long before those scraps of paper made their presence felt. Over the next few years people gravitated to London in search of work. Some, like Vron, contacted me for advice on good places to live, others to try to find old friends. A dozen of my old house mates and Panto people settled in London and we would meet up occasionally, but many like Andy Seymour, my Panto Girly and the History Gang simply vanished.

One day in 1987 while working in Trafalgar Square I was waiting to cross the road at a pedestrian crossing. Opposite there was a large crowd of people waiting for the lights to change, when they did, the crowd parted and there she was, my Panto Girly on her way to work.

She joined the others in my Panto Gang and became a lifelong friend, wine bar companion and dinner party guest for the next couple of decades until her tragically early death 10 years go. Another of the Panto Girlies took me on my very first skiing holiday in 1991 and I have been skiing every year since. A lifelong friend, I first met Di in Fresher’s Week 1973. Flick and Keith, two of my former house mates have been my walking companions since we all retired and we meet for a week’s Jolly every year.

Even the History Gang swam back into focus 9 months ago when after being prompted by lockdown, I finally sorted out my father’s home movies. A short clip of film revealed the startling image of our last meeting at Jubilee Drive which included two sadly deceased much loved friends. The obligations of friendship last a lifetime and beyond, so I set about ensuring that copies of the film reached all the surviving members of the History Gang.

So there you have it, the course of our lives and lifelong friendships influenced for decades by the loss or survival of those scraps of paper. After 45 years they remain in my Liverpool box along with my paltry collection of photographs and are my most precious possessions. Just scraps of paper.

Oh, and Andy Seymour? At about ten in the evening of the 29th December 2020 his telephone rang. He was somewhat surprised."

All of the images featured in the story above have been shared by University of Liverpool alumni in the 'Carnatic Halls in the 1970s' Facebook group. If you would like to join, you can find the group here.